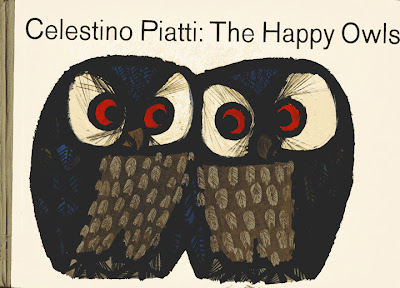 Today's vintage children's book is The Happy Owls by Swiss Artist, Celestino Piatti. If I had to described Piatti's work I would have to use many terms like balanced compositions, great use of color, creative designs, good line work, appealing, etc., etc.,... just simply great illustrations. LOVE HIS WORK.
Piatti was a talented and prolific artist who wore many hats. Besides being a Graphic Artist, Illustrator, Painter, Book Designer and Poster Artist, he also did lithographs, etchings, woodcuts, linocuts, worked with ceramics and sculpted. 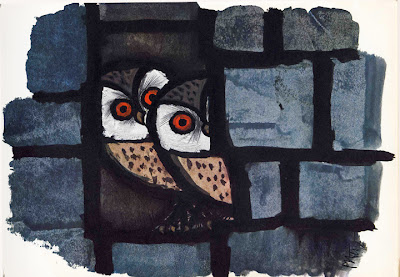 Owls were used repeatedly in Piatti's work. Of the owl Piatti once said "I have never been able to get this creature out of my mind, especially it's eyes. Nearly every picture I draw has an eye somewhere." 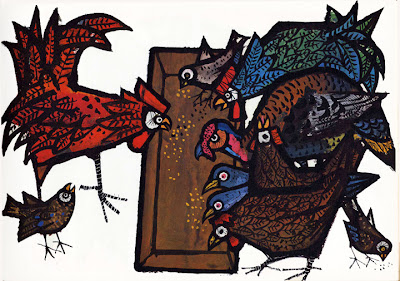 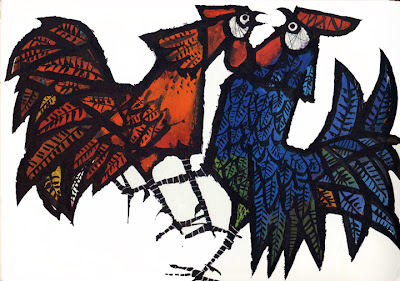 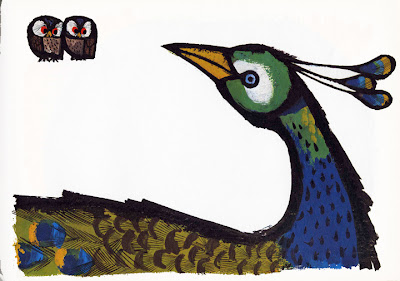 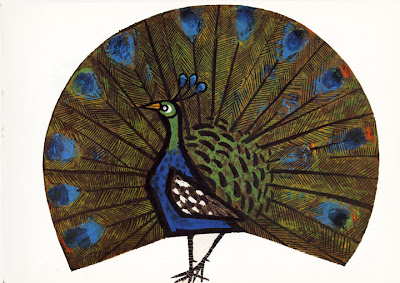 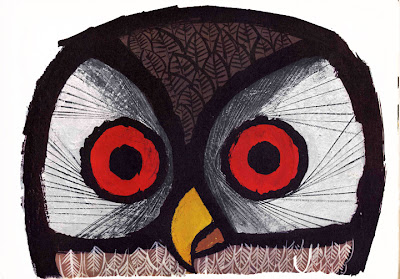 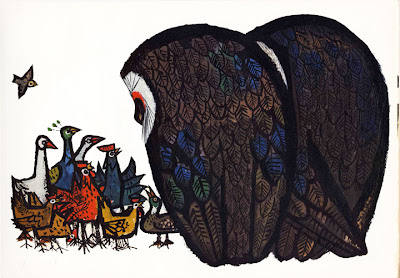 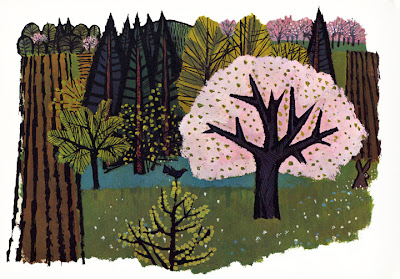 Piatti frequently used the four elements of water, earth, air and fire in his work. To represent these elements he used the fish, tiger, owl and sun. 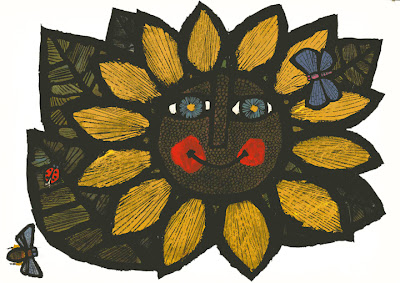 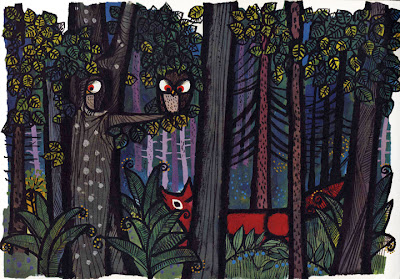 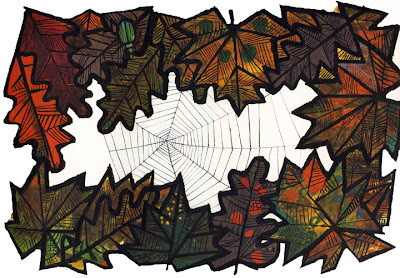 The Happy Owls is a simple story with a strong moral. It's about seeing beauty in the world around us and being thankful for what we have. Perhaps this book wasn't written for children only? 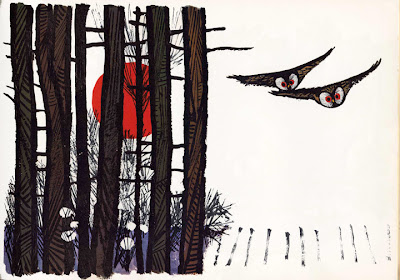 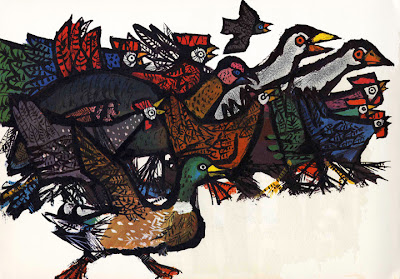 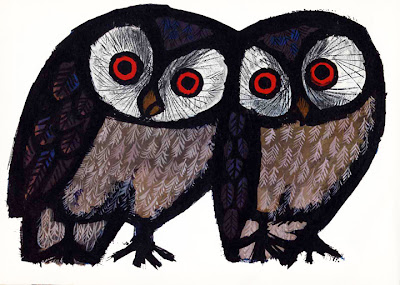 Celestino Piatti lived from 1922-2007. In the 30 years that he worked for the DTV (Deutscher Taschenbuch Verlag) in Munich, he designed almost all of their book covers, over 6300 designs in all! Of the 500 posters Piatti did, 30 won "Best Swiss Poster of the Year." A much smaller part of his work, Piatti did nine children's books.
I hope you enjoyed this post. I am taking a winter break and will be back on January 2nd.
Resources:
Wikipedia
Kambly
eNotes
Posted by Jil Casey at 10:38 PM 1 comment:

The children were nestled all snug in their beds,
While visions of sugarplums danced in their heads.
When out on the lawn there arose such a clatter,
I sprang from my bed to see what was the matter.
Away to the window I flew like a flash,
Tore open the shutters and threw up the sash.
The moon on the breast of the new fallen snow
Gave a luster of midday to objects below,
When, what to my wondering eyes should appear,
But a miniature sleigh, and eight tiny reindeer,
With a little old driver, so lively and quick;
I knew in a moment it must be St. Nick.
More rapid than eagles his coursers they came.
And he whistled, and shouted, and called them by name:
"Now, Dasher! Now Dancer! Now Prancer and Vixen!
On Comet! On, Cupid! On Donder and Blitzen!
To the top of the porch, to the top of the wall!
Now, dash away! Dash away! Dash away all!" 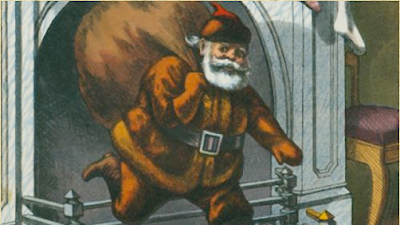 As I drew in my head,
and was turning around,
Down the chimney St. Nicholas came with a bound.
He was dressed all in fur,
from his head to his foot,
And his clothes were all tarnished
with ashes and soot.
A bundle of toys
he had flung on his back,
And he looked like a peddler
just opening his pack.
He spoke not a word, but went straight to his work,
And filled all the stockings, then turned with a jerk.
And laying his finger aside of his nose,
And giving a nod, up the chimney he rose.
He sprang to his sleigh, to his team gave a whistle,
And away they all flew like the down of a thistle.
But I heard him exclaim as he drove out of sight,
"Happy Christmas to all, and to all a good night."
Posted by Jil Casey at 8:07 AM 4 comments:

She Knows if You've Been Bad or Good... 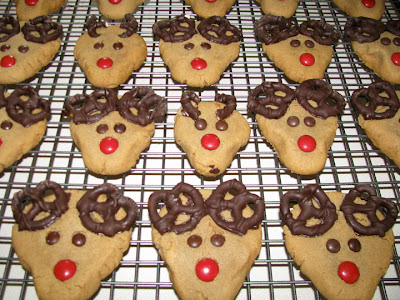 I woke up this morning to find these lovely reindeer cookies my daughter made last night. She's home from college and got in the Christmas baking mode. (Yess!!) Knowing the people that live in this house, she left this note... 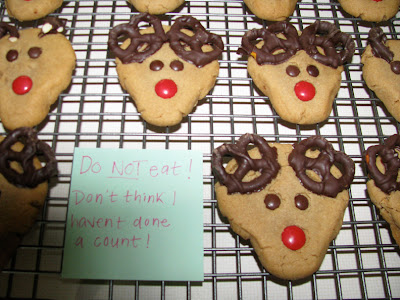 I think they are so cute. It's a peanut butter cookie shaped like a reindeer head.
Chocolate covered pretzels are the antlers with mini and regular size M&M's for eyes and nose. 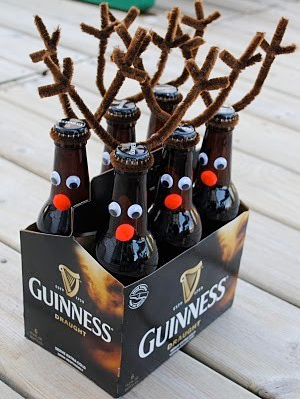 I've been seeing these reindeer beers all over the place. I'm using this idea for my three daughter's boyfriends this Christmas.
I think this mid century Christmas card is just beautiful. Here are a bevy of them, my way of saying Merry Christmas to you. 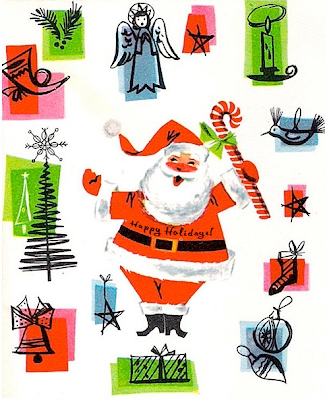 Whatever you celebrate, wherever you are, Merry Christmas to you. I wish you joy, peace and good fortune.
Posted by Jil Casey at 10:03 AM 1 comment:

We Need a Little Christmas... 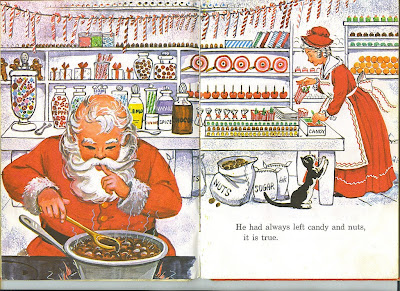 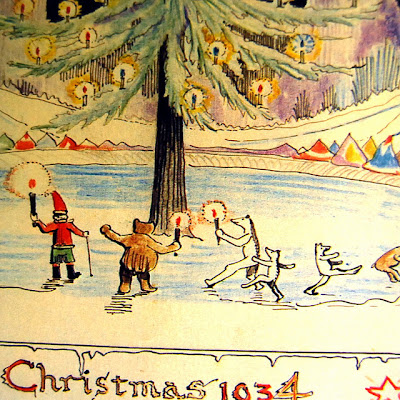