The Night Before Christmas, Douglas Gorsline

, has been illustrated by many different artists over the years. This version illustrated by Douglas Gorsline is very fine. His pen and ink illustrations are very detailed. The children sleeping in one bedroom is endearing and I also like the picture framing of the text. I've had this copy since the late 80's and can't show the cover as one of the kids scribbled on it when they were young. To read about Clement C. Moore click here.

"Twas the night before Christmas when all through the house,
Not a creature was stirring, not even a mouse.
The stockings were hung by the chimney with care,
In hopes that St. Nicholas soon would be there." 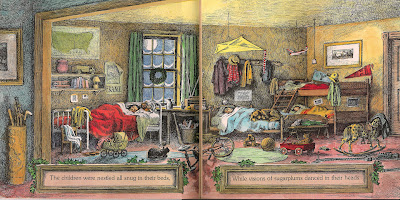 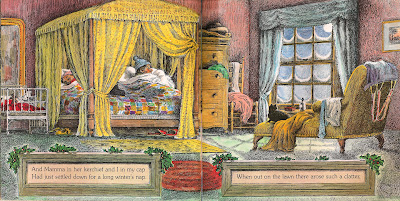 "I sprang from my bed to see what was the matter.
Away to the window I flew like a flash,
Tore open the shutters, and threw up the sash.
The moon on the breast of the new-fallen snow
Gave a luster of midday to objects below,
When, what to my wondering eyes should appear,
But a miniature sleigh, and eight tiny reindeer,
With a little old driver, so lively and quick;
I knew in a moment it must be St. Nick." 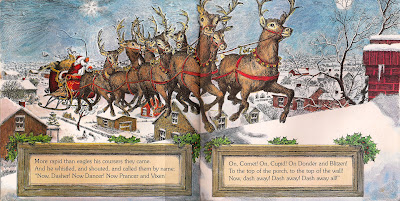 "As dry leaves that before the wild hurricane fly,
When they meet with an obstacle, mount to the sky,
So up to the housetop the coursers they flew
With a sleigh full of toys, and St. Nicholas, too.
And then in a twinkling, I heard on the roof
The prancing and pawing of each little hoof.
As I drew in my head and was turning around,
Down the chimney St. Nicholas came with a bound.
He was dressed all in fur from his head to his foot,
And his clothes were all tarnished with ashes and soot.
A bundle of toys he had flung on his back,
And he looked like a peddler just opening his pack."

"He spoke not a word, but went straight to his work,
And filled all the stockings, then turned with a jerk.
And laying his finger aside of his nose,
And giving a nod, up the chimney he rose.
He sprang to his sleigh, to his team gave a whistle,
And away they all flew like the down of a thistle.
But I heard him exclaim as he drove out of sight," 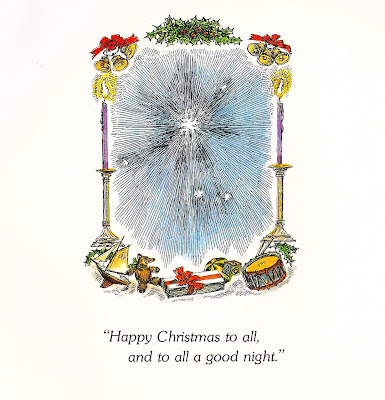