The Story of Ferdinand Illustrated by Robert Lawson 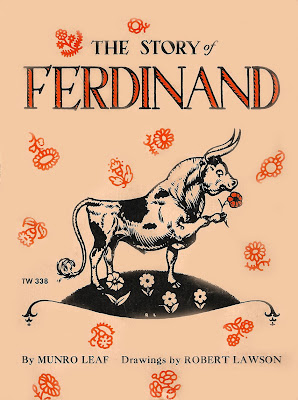 This humorous story by Munro Leaf is about a peaceful bull named Ferdinand. Unlike the other bulls who joust each other and want to be chosen for the bull fights in Madrid, Ferdinand just wants to sit under his favorite cork tree and smell the flowers. After being stung by a bee, Ferdinand is mistaken for a fierce bull and chosen for a bull fight.
The pen and ink illustrations by Robert Lawson in The Story of Ferdinand

are top notch. His masterful compositions add just the right amount of humor to the story. Lawson really had the knack of drawing from great vantage points; like the close up of  Ferdinand's bottom about to sit on a bee or a steep angle from very tall buildings down to the street below. 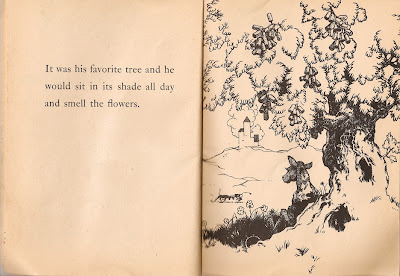 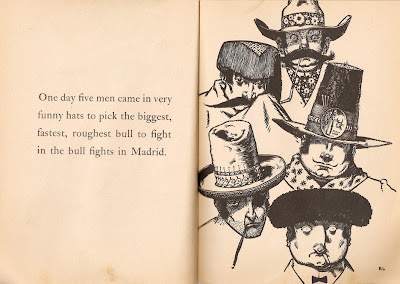 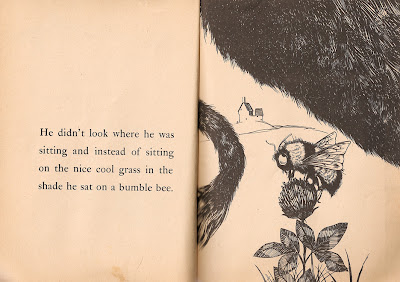 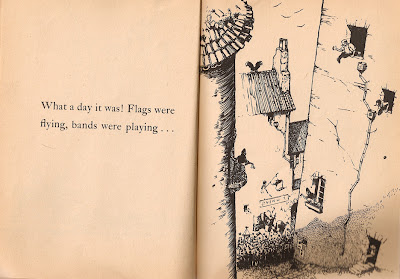 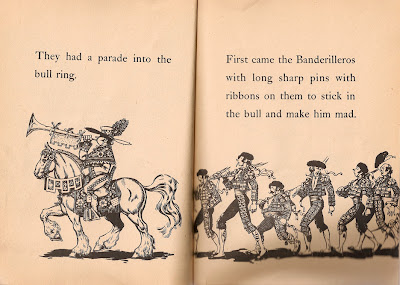 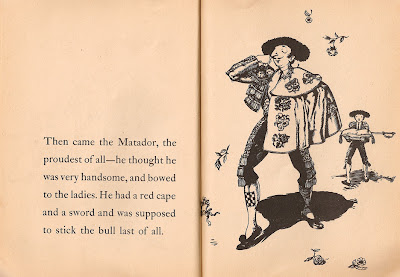 The Story of Ferdinand
By Munro Leaf
Drawings by Robert Lawson
Scholastic, 1964
Robert Lawson was born October 4, 1892 in New York City and grew up in Montclair, New Jersey. After high school he studied for three years under illustrator Howard Giles at the New York School of Fine and Applied Art (Parsons College). His career started in 1914 with a illustration in Harper's Weekly. After that he published in other magazines such as Ladies Home Journal, Everybody's Magazine, Century Magazine and Designer. During World War 1, Lawson was a member of the first U.S. Army Camouflage Unit where he served in France with other artists. After the war, Lawson illustrated his first children's book, The Wonderful Adventures of Little Prince Toofat

in 1922. After that he illustrated dozens of children's books such as Mr. Popper's Penguins

, The House That Grew Small, The Roving Lobster, The Prince and the Pauper

and The Great Wheel. He was the author and illustrator of seventeen other books such as Rabbit Hill

and Ben and Me: An Astonishing Life of Benjamin Franklin by His Good Mouse Amos

. Lawson was the first person to receive both the Caldecott Medal for They Were Strong and Good

, 1941, and the Newberry Medal for Rabbit Hill, 1945. Another award that Lawson received was from the John Taylor Arms Prize by the Society of American Etchers for an etching that he did.
Lawson referred to his home in Westport, Connecticut as 'Rabbit Hill', since it was the setting for his book. He died there on May 27, 1957. An annual conference is held in Westport in his honor.
Posted by Jil Casey at 1:58 PM