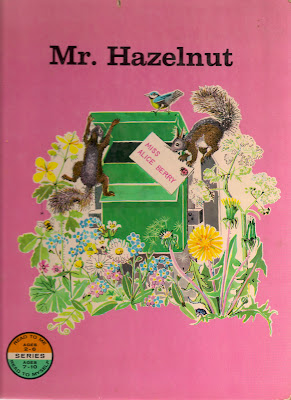 is a charming book with very sweet illustrations done by Swedish illustrator, Birgitta Nordenskjold.  The subject of the story is a young girl named Alice. She is the quintessential Swedish girl with her blond hair, blue checkered dress and fisherman sandals. Alice starts receiving mail from Mr. Hazelnut, a tailor, who notices that she is growing out of her clothes and wants to make her some new ones. He makes her a new dress, coat and pajamas. He does not want any payment for the clothes, but asks Alice to take care of her clothes and to be kind to her brother Henry. Mr. Hazelnut then disappears, before Alice and her parents can thank him. Alice's clothes grow with her as she grows up and she wears the pink ruffled dress at her wedding.
One illustration in the book that I really like is on the title page (see pic). I love the little green tree with the sewing tools on it!  Many of the illustrations have flowers, bees, birds, squirrels, dogs, cats and other creatures which add to the the charm. I like the Swedish houses and sheds. The illustration with Henry sick in bed, surrounded by all his toys, is especially sweet. Birgitta's illustrations have a light touch to them and the color palette is just right for the story. 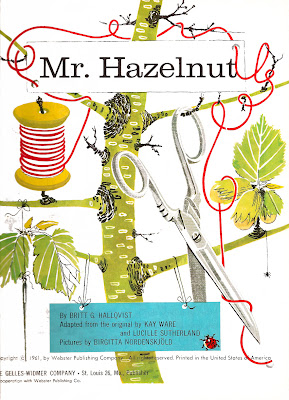 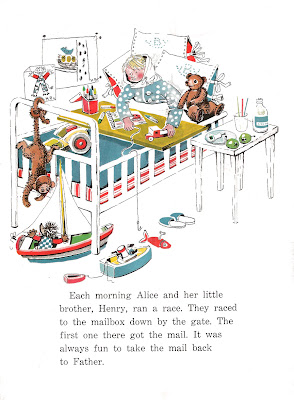 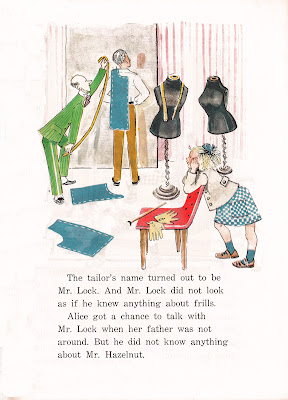 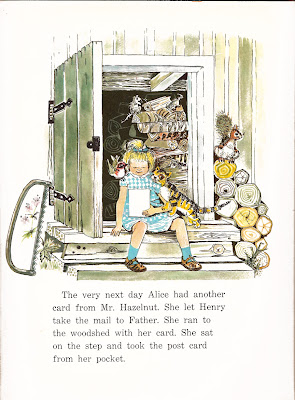 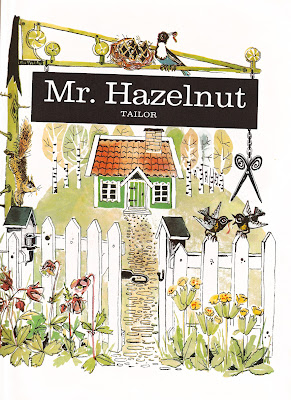 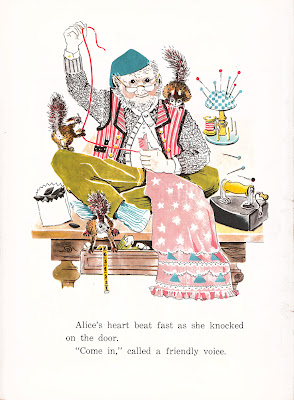 Mr. Hazelnut
By Britt Hallqvist
Illustrated by Birgitta Nordenskjold
Gelles-Widmer Co., 1961
It was not easy to find information about Birgitta Nordenskjold. When I finally did, it was a short biography written in Swedish by her daughter, Agnes Ankarcrona. Thank goodness for online translators! I am including more information than usual as it seems a shame that it should be difficult to find information about Birgitta after the fine work she did as an illustrator.

Bridget Anna Catherine Nordenskjold (Moller) was born January 2, 1919 in Sweden and raised in a large family. Her father Ludwig Moller, a physician, often took the family on trips, including places such as Egypt and Italy.  Bridget (Birgitta)  took everything in. At the age of seventeen she met a young lieutenant named Sven Nordenskjold. They married after Bridget finished her training as an art teacher at the College of Arts school in Stockholm. She then got a job there as a teacher of freehand drawing. As Birgitta said "I never stopped school" and she stayed at the College of Arts school until Sven's retirement.
Bridget illustrated children's books such as Mr. Hazelnut, three of Astrid Lindgren's books:  I Don’t Want to Go to Bed (1947), I Want to Go to School Too (1951) and I Want a Brother or Sister/That’s My Baby (1954).  She also illustrated mushroom books by Nils Suber, a mushroom expert in his time and Annaberg's recipes in DN.  Everything Birgitta did was with verve and great interest. Birgitta hosted/organized dinners and receptions at Sven's request.  She was a good cook - svampstuvnigar, soup and deer saddle were her specialty. Bridget loved Gottskar where friends and family filled the house and they ate hummersupeer (lobster) and crab. According to  Agnes, Birgitta was the family's cohesiveness. She said Birgitta was a strong wonderful mother and grandmother. Birgitta celebrated her 90th birthday at home with friends and family around her, shortly before passing away in January 2009.
Posted by Jil Casey at 6:41 AM 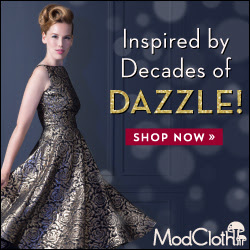