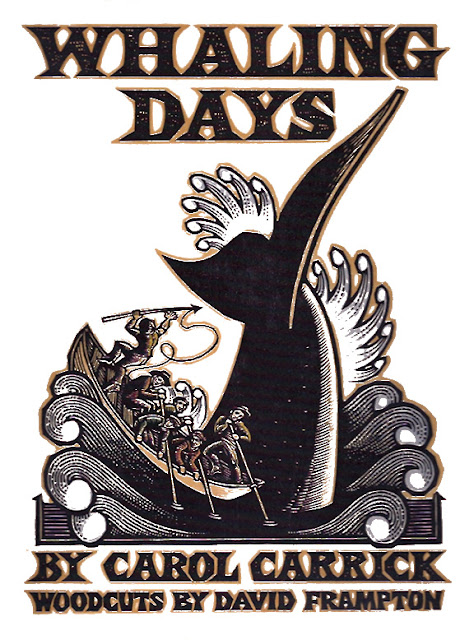 , written by Carol Carrick, tells the interesting story of American whaling. This book covers the history of whaling, different uses people had for whale, and the difficult, laborious and often dangerous lives of those who lived and worked on the whaling ships.  I  wonder why there aren't more stories about the strong men who were whalers? They should rate high on the adventure scale like cowboys and pirates.It took a brave soul to chase a whale on the open sea, harpoon it and go on a "Nantucket sleigh ride". 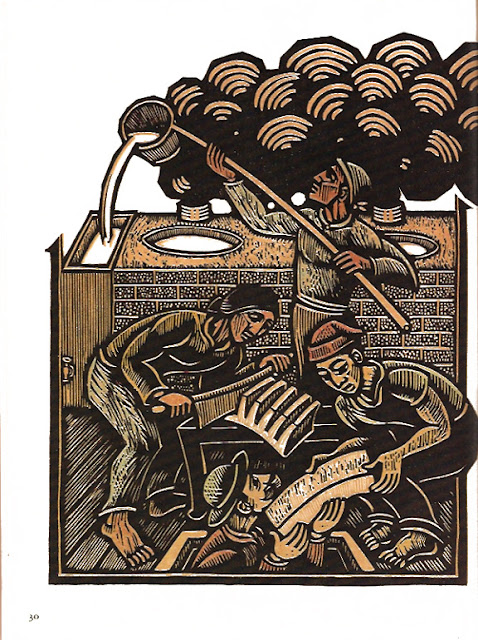 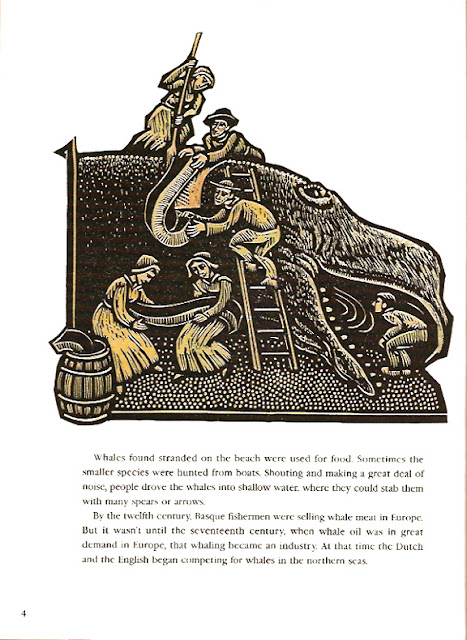 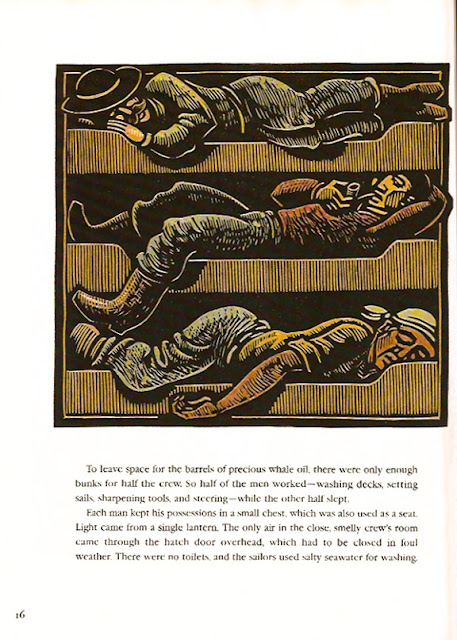 Having done woodcuts myself, I really appreciate David Frampton's skillfull woodcut illustrations in Whaling Days. His design is very consistent throughout the book. The illustrations are strong and detailed. I especially like his depiction of whales, waves and water. He makes the most of a limited color pallette and perhaps because of it, really focuses on the design and craft. 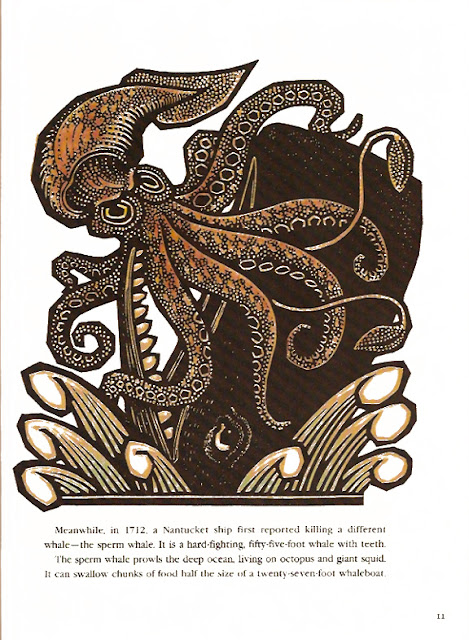 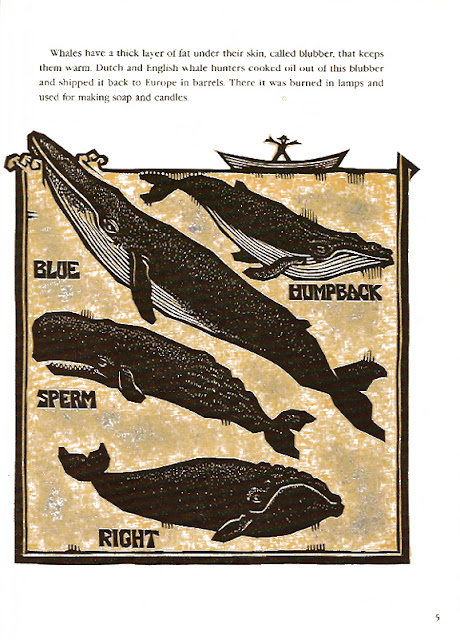 Whaling Days
By Carol Carrick
Woodcuts by David Frampton
Clarion Books, 1993
Whaling Days makes me want to read Moby Dick. Any have suggestions for an illustrated edition?
Some interesting facts about David Frampton: he has been an author and illustrator of children's books and young adult books for over thirty years. Frampton studied art at the Rhode Island School of Design. Among the books he has illustrated are: Guide to the Imaginary Birds of the World

, The Song of Francis and the Animals

. He is the author/illustrator of The Whole Night Through

. Some of his honored works include The Whole Night Through, My Son John

written by Jim Aylesworth, and Rhyolite

written by Diane Siebert.
Posted by Jil Casey at 9:49 PM 4 comments: Links to this post

The Owl and the Woodpecker, Brian Wildsmith 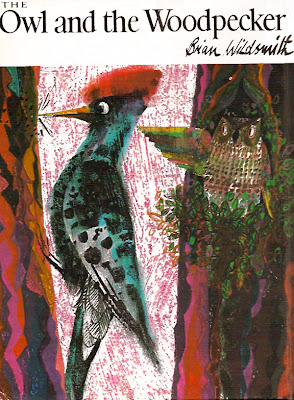 Brian Wildsmith's paintings in The Owl and the Woodpecker 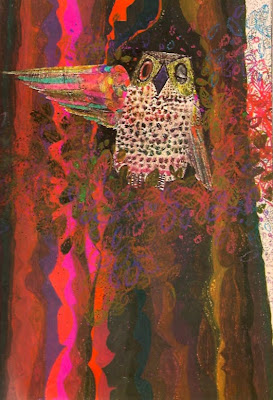 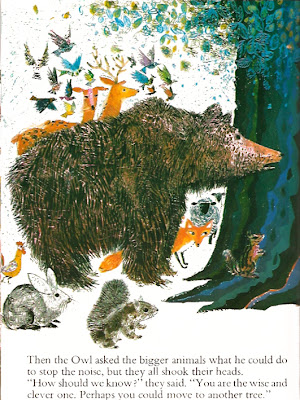 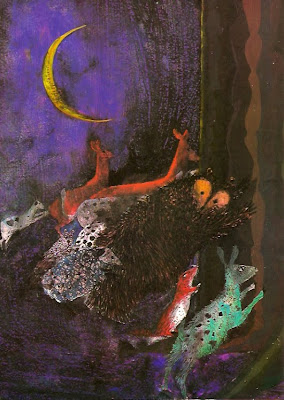 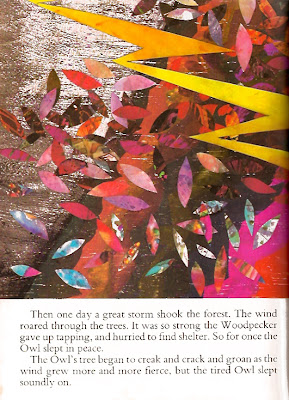 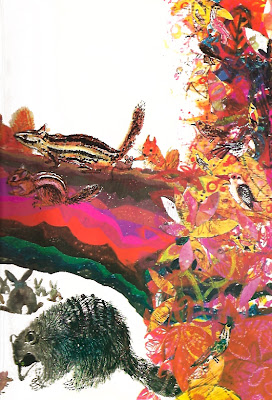 The Owl and the Woodpecker
Illustrated by Brian Wildsmith
Franklin Watts, 1972
Some interesting facts about Brian Wildsmith who celebrated his 80th birthday this year: His first children's book, published in 1962 won the Kate Greenaway Medal, Britain's equivalent of the Caldecott Medal. He was also a runner up for the same medal for The Owl and the Woodpecker. In 1994 the Brian Wildsmith Museum of Art was established in Izukogen, Japan (near Tokyo) where 800 of his paintings are on loan to the museum. Wow!